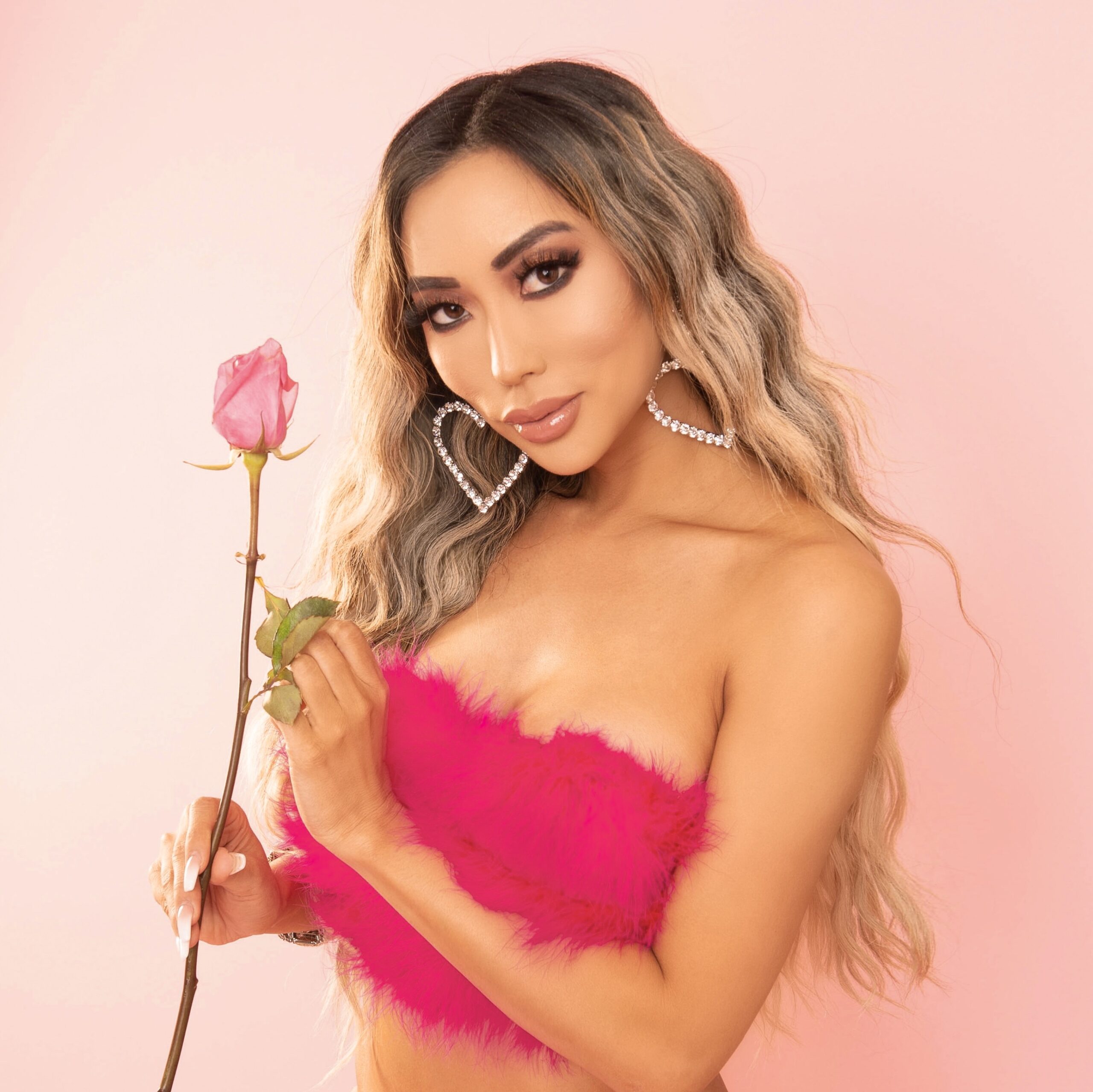 Ah, Pinch Me! One year ago, Kim Kardashian West revolutionized the shapewear and loungewear category with her launch of SKIMS. Before SKIMS, shapewear was more stigmatized and something to hide rather than to show off. Thanks to Mrs. West, we are all now flaunting our sexy shapewear. A year after the launch, I was asked by her team to be in her one-year anniversary campaign! I am so grateful to be able to be a part of something so iconic with a brand that I wear all the time.

My call time was 11 am at a studio in Hollywood. Excited and bursting with anticipation, I slipped on one of my favorite pieces to wear to the shoot: the SKIMS cotton rib tank. This is my go-to tank; it’s super soft, comfy and matches everything! I like to wear comfortable clothes on set, as we sit in the makeup and hair chair for a while and it’s best to feel relaxed and not constricted in your clothing.

We were welcomed to set with breakfast and a Covid-19 test. What a world we live in! All jokes aside, I am so thankful to Kim’s team for making this feel as safe as possible, ensuring that anyone on set was tested. The SKIMS breakfast was SO my style: clean and tasty, healthy foods! I grabbed the coconut chia pudding and Avocado toast!

After I finished breakfast, and received my negative test result, the pampering of hair and makeup began. We first started with my nails. I had my standard nails on already, which are long, coffin-shaped, white and nude ombre nails. Nail artist Jolene Brodeur shaped my nails into an almond shape and changed them to nude, and I ended up loving the change! Then I moved over to makeup and hair.

The makeup artist was Wendi Miyake, someone who is very familiar with doing the Kardashians’ makeup. She did my glam so beautifully! After she did my face makeup, I thought she was going to do my eyes with lashes, but she told me she wasn’t doing lashes. I freaked out in my mind for about 5 seconds because everyone knows I love a FULL GLAM moment, but I know that the direction they were going was a natural vibe. My hair though, was HUGE and glam and wavy done by Gregory Russell! He was super fun, and both Wendi and Gregory were so quick and talented.

Once I was done with hair and makeup, I put on my first outfit: the Seamless Sculpt Sculpting Bodysuit in the shade Clay with the neoprene Waist Trainer also in the shade Clay. Then I got to set! The theme was a SKIMS dollhouse. I shot in one of the dollhouse rooms with a bunch of SKIMS polaroids on the wall! There was a phone on the wall and some chips and a drink for me to have fun with as props. Everything on set was so cool, and there were mini SKIMS dolls and mini rooms as well. There were also life-size cut outs of Kim and SKIMS models. Loved the concept!

I then changed into a black set from the Fits Everybody Collection.  Fits Everybody Unlined Underwire Bra and the Fits Everybody Dipped Front Thong. I did several artistic photo concepts and videos creative directed by Vanessa Beecroft. She is known for her conceptual performances or “living paintings” and often works with Kim Kardashian in her SKIMS campaigns and also with Kanye West in his runway shows! It was a very cool opportunity to be able to work with her and take her direction!

This was very different from my usual photoshoots that I do with my photographers, and I was inspired more than ever. KKW herself came to the shoot after I was done and shot on the set as well!

Thank you to Kim Kardashians West and SKIMS team for being so accommodating and professional! I had a great time on set and being a part of this campaign, and I vlogged this whole experience on my YouTube channel that you can watch here! Happy 1-year anniversary!

Sign up with your email address to receive news and updates!

The Summer Skin Essentials to Get You Through This Heat Wave

Why Lingerie is The Ultimate Form of Self Love

My Favorite Trend for the Holidays – Girly Hollywood Glamour

Thank you! 💖✨💅🏻💫👑🎂 twitter.com/FamousBirthday…
8 months ago
@bankyjhay @LINEjp_official it's my father's account. thanks for the help. how can you help?
9 months ago
Happy #firstdayofspring 💜🌸✨💖 https://t.co/iCz9OIcnNY
11 months ago
@Shopify I can't log into my shopify store. My URL /admin keeps saying not found
1 year ago